With the rapid development of animal husbandry, a large number of excrement and sewage have been produced. The harmful elements in the fecal waste are beyond the standard, so it is difficult to deal with them by the traditional way of returning to the field. In view of this situation, people have developed an organic fertilizer production line with movable and high-efficiency solid-liquid separation technology as the core and integrated high-efficiency mixer, compost machine, fertilizer granulator and other organic fertilizer production equipment.

The research and development of organic fertilizer production line and sterilization system will be conducive to the formation of harmless treatment, resource utilization and commercialized management and production industrial chain of livestock manure, achieve the goal of industrialization, marketization and large-scale production, and effectively promote the development of ecological agriculture and circular economy in the city. 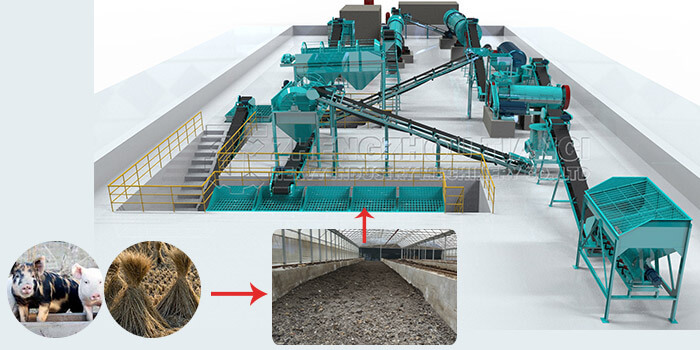 After screening the fermented organic wastes, the raw materials with binders and other ingredients to be compatible shall be measured, proportioned and mixed in the proportioning and mixing system according to the proportioning requirements. The fully mixed materials shall be uniformly and continuously sent to the fertilizer granulator by the belt conveyor, dried by the dryer at low temperature and large air volume (< 65 ℃), cooled and screened, and the finished particles It is transported to the finished product bin by belt, measured by the computer quantitative packaging system, and stored in the warehouse.
Share With:

Pre:What is the development prospect of organic fertilizer production equipment